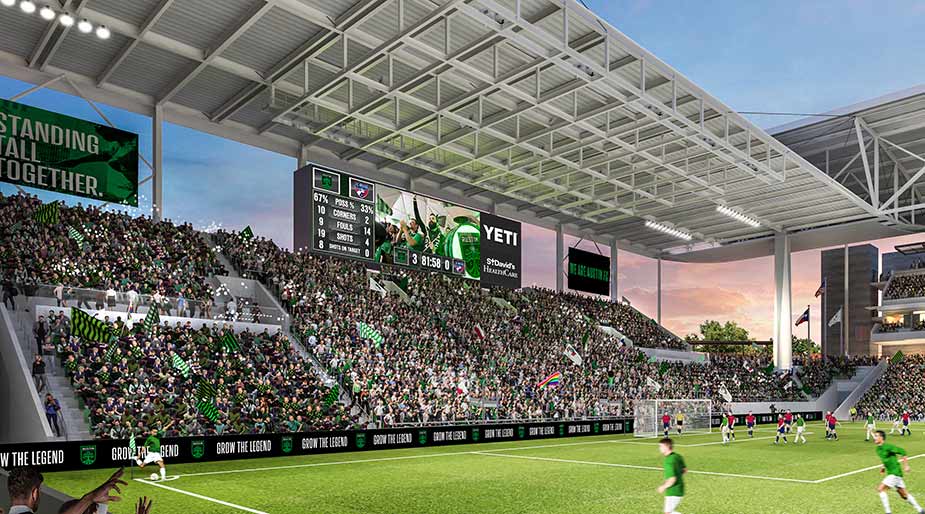 BROOKINGS, S.D. – Aug. 12, 2020 – To help Austin FC open a new soccer stadium at McKalla Place in Texas, Daktronics (NASDAQ-DAKT) of Brookings, South Dakota, has been tasked with manufacturing and installing an LED super system with all displays featuring 10-millimeter pixel spacing and combining for 5,580 square feet. A new main video display, two ribbon displays, a pitch perimeter display and a double-sided marquee are currently being installed as the stadium is being constructed for the 2021 season.

"After a competitive review process, Austin FC is pleased to announce that we have chosen Daktronics' industry-leading LED technology to enhance the stadium experience in our world-class venue," commented Andy Loughnane, President of Austin FC.

The centerpiece of the installation will be the main video display at the north end of the stadium. It will measure 24 feet high by 84 feet wide to bring high-resolution imagery to fans throughout the stadium. It is capable of variable content zoning allowing it to show one large image or multiple windows of digital content. It can show live video, instant replays, up-to-the-minute statistics, game information, graphics, animations and sponsorship messages.

"Installing a higher resolution product throughout the stadium ensures fans receive a better viewing experience at every event," said Daktronics President and CEO Reece Kurtenbach. "We're excited to work with the entire Austin FC organization to bring this project to life for their team and their fans. We look forward to the stadium opening in 2021 with our technology helping the team engage and communicate with their audiences."

Along the seating fascia of the stadium will be two ribbon displays and surrounding the field will be a pitch perimeter display measuring 3 feet high by 551 feet in length. These can show complimentary graphics and information to the main displays while also allowing for the opportunity to highlight sponsors throughout events.

As fans arrive at the stadium, they will be welcomed by a double-sided marquee display. The displays on both sides will measure approximately 14.5 feet high by 26.5 feet wide and can share matchup information, sponsorship messages and promotions for upcoming events.

Daktronics has grown with the sports industry from the company's beginnings in 1968. Today, the company has integrated LED super systems in nearly 60 percent of all professional sports facilities in the United States. For more information on what Daktronics can provide, visit www.daktronics.com/professionalsports.

Austin FC operates Austin FC Academy, the fully funded boys development academy, which aims to represent the highest level of competition for elite players in Central Texas.  It serves as the feature pathway to MLS for the region's most talented young players.

Austin FC's parent company and ownership group is Two Oak Ventures, the entity which manages Austin FC and affiliated assets, including the MLS soccer park and stadium under construction at 10414 McKalla Place in Austin, Texas, and St. David's Performance Center, the $45 million training facility of the Club and Austin FC Academy, scheduled to open in Spring 2021. St. David's Performance Center will be located at the Parmer Innovation Center in Northeast Austin.