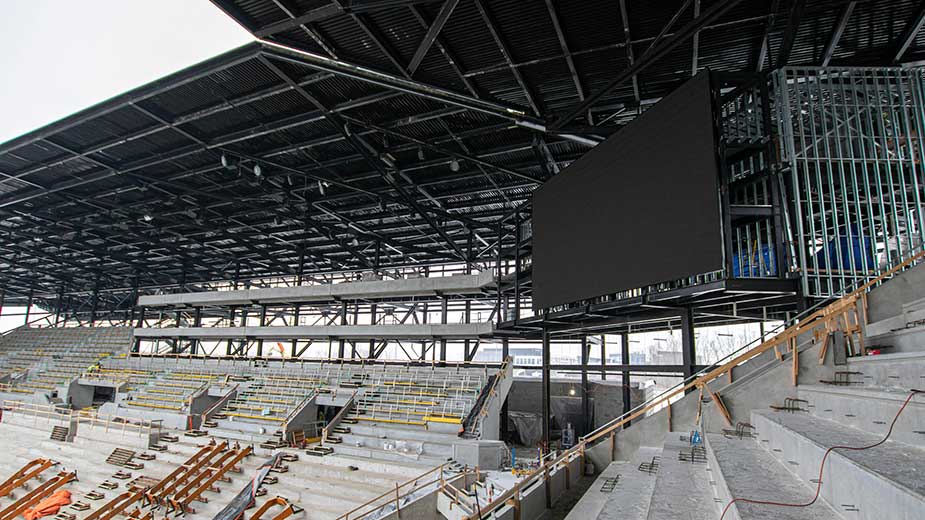 BROOKINGS, S.D. – Mar. 24, 2021 – To help Columbus Crew SC open a new downtown stadium in Columbus, Ohio, the club has partnered with Daktronics (NASDAQ-DAKT) of Brookings, South Dakota, to design, manufacture and install six LED displays to entertain and inform soccer fans at every match. Installation of the 8,700 total square feet of LED displays is ready for the opening of the stadium this July as the Club opens its modern and dynamic home.

"We are excited about partnering with Daktronics as we prepare to open New Crew Stadium," said Steve Lyons, Executive Vice President and Chief Business Officer of Columbus Crew SC. "Daktronics' state-of-the-art LED screens will provide our supporters with engaging and interactive match content and help elevate the match-day experience at our new stadium, creating a true home-field advantage for our team."

"The LED displays will bring extra life to this new chapter in Columbus Crew soccer in Ohio," said Daryl Mihal, Daktronics regional sales manager. "The new stadium is phenomenal and we're excited to be a part of bringing it all together for the team and their fans. The layout will give fans a great view of the action both on the field and on the video boards at every event."

Ribbon displays were installed on each side of the stadium's seating fascia to supplement the information and graphics provided by the main displays while also offering the opportunity to highlight sponsors throughout events. The east ribbon measures 2.5 feet high by 408 feet wide and the west ribbon measures 2.5 feet high by 270 feet wide. Both ribbons feature 15HD pixel layouts to share excellent image quality of all messages shown.

A feature video display was added to the plaza of the stadium to connect with and engage fans in that area and as they arrive for the main event. This display measures 14.5 feet high by 24 feet wide and features 10-millimeter pixel spacing.

The main video displays are capable of variable content zoning allowing each to show one large image or to be divided into multiple zones to show any combination of live video, instant replays, game information and statistics, graphics and animations, and sponsorship messages.

In addition to the equipment installation, Columbus Crew SC will also receive a content package that will be produced and delivered by Daktronics Creative Services.

Daktronics will also be including its powerful Show Control solution with this installation. This industry-leading system provides a combination of display control software, world-class video processing, data integration and playback hardware that forms a user-friendly production solution. For more information on Show Control, visit www.daktronics.com/show.

Daktronics has grown with the sports industry from the company's beginnings in 1968. Today, the company has integrated LED super systems in nearly 60 percent of all professional sports facilities in the United States. For more information on what Daktronics can provide, visit www.daktronics.com/professionalsports.

Columbus Crew SC (Soccer Club) is the first club in Major League Soccer. Crew SC is operated by The Edwards Family and Haslam Sports Group. The Black & Gold are the 2020 MLS Cup Champions. The Club won its first MLS Cup championship in 2008 and also won the 2002 Lamar Hunt U.S. Open Cup as well as MLS Supporters' Shield titles in 2004, 2008 and 2009. The 2020 campaign was the Crew's 25th season in MLS and the 21st season at Historic Crew Stadium -- the first soccer-specific stadium in the United States.