Mishawaka High School in Mishawaka, Indiana, installed a video board in their football stadium to secure revenue and teach students. Two years later, they’ve certainly accomplished that – and so much more. 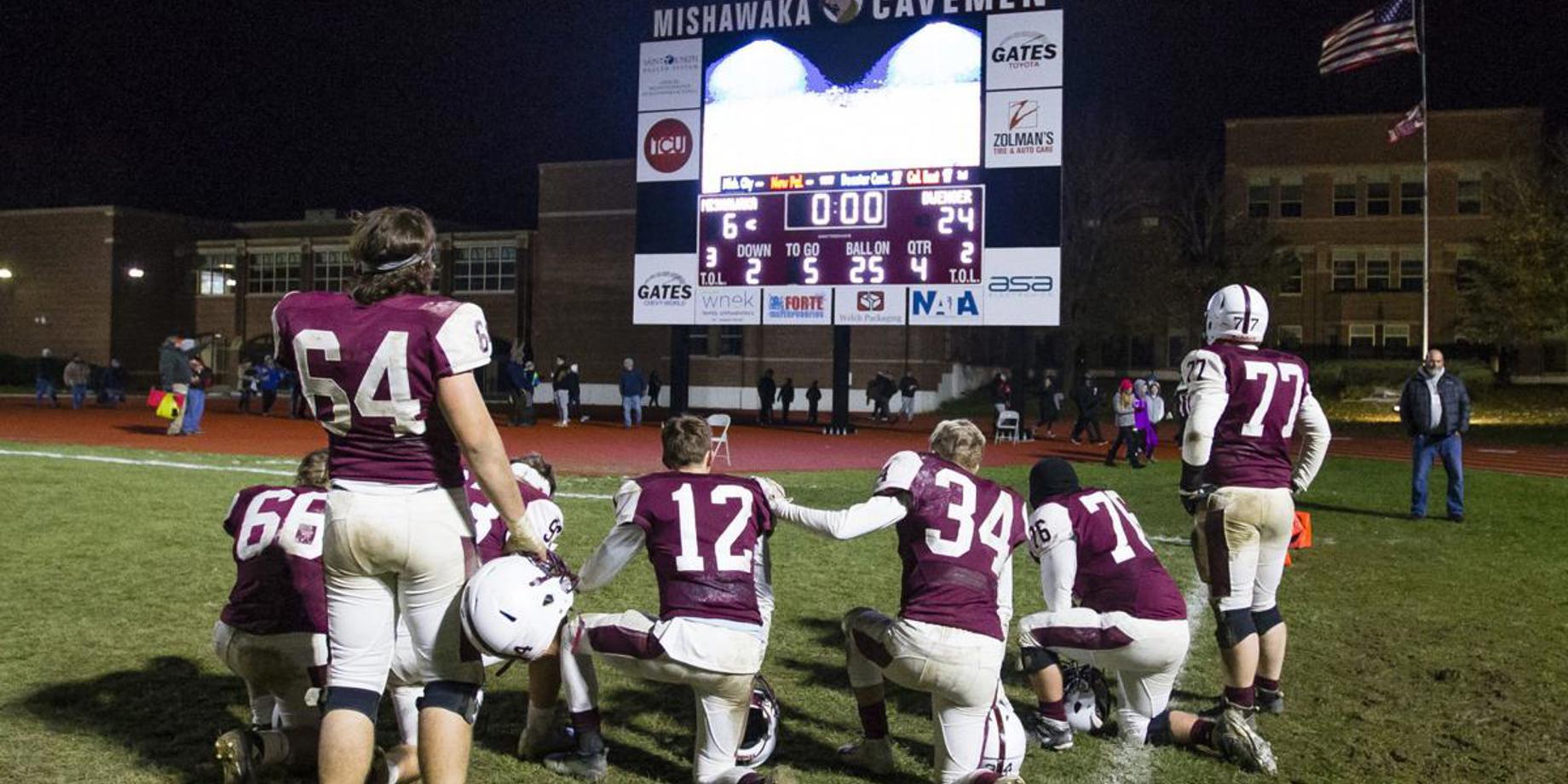 By selling both permanent sponsorship spots and video ads to show during the game, the board will pay for itself in a few years and bring in more revenue to boot. In fact, they’re still on target financially, despite COVID-19. But it’s the student involvement that means the most at Mishawaka high School.

In fact, when Director of Athletics Dean Huppert and the former superintendent prepared to present their idea of installing a video board to the school board, they got students involved right away.

“As a teaser during football season, we brought in a monster message board on wheels during the big rivalry game. We placed it where we thought the permanent one would go and showed what it could be. Students had a camera going with a mission to present it to the school board, which they did. Students did a lot of it because they would benefit from it. They took it to heart, and those students knocked it out of the park.”
– Dean Huppert

Shortly after that, Huppert – a former broadcast professional – had the most meaningful moment of his career. Just a few months after they got approval, the video board was installed and ready to go. They turned it on for the first time at about 6:00 one evening.

“Within 10 minutes, two of the kids who had presented to the school board were there,” he says. “They were so excited. It was the most amazing part of my career, over big interviews, covering bowl games and championship games. The students were so invested.”

There are nearly 1,500 students enrolled at Mishawaka High School. Before the video board was installed, there were no kids in the broadcasting program. Once the board was in place there were seven, and last school year, 34 students got involved, and the program continues to get attention.

“We had the Mishawaka Sports Network in place when we started, but now it’s the Mishawaka Network, because we’re using it beyond sports,” says Huppert. “It’s online. The students build graphics, work on Facebook and Twitter, broadcast school board meetings and volleyball games, swim meets and more. It wouldn’t have happened at this level without the video board. That makes it easy to see the prestige. These kids are part of a team. They do important work.”

Huppert helped train kids at first, but soon the school brought on Matt Rendall to teach it, and Huppert says that was a game changer.

“He’s a Mishawaka graduate. He’s the guy who makes it happen,” says Huppert. “He’s incredible. He did some high school broadcasting, but he basically taught himself, and then taught the kids. He was last year’s teacher of the year.”

Rendall gives credit to the kids.

Those scrolling graphics are scores from 15 to 20 other schools that run across the bottom of the board. They show conference game scores, playoffs in Class 5A so Mishawaka can track who they’ll be playing the next week, and other scores of interest.

“It keeps people involved, so they’re not looking on their phones to see what’s going on elsewhere,” says Huppert. “One of the students came up with the idea, because honestly, we thought everyone was doing it. So the class figured out how to do it. They just make ideas work.”

Highlighting football – and beyond

Game nights have the students running the show, including slow motion replays. Huppert says that shows the power of the video board.

“We’re a high school, not an NFL stadium,” he says. “We use slo-mo, but we only play positive slo-mo, not controversial plays. We’re not putting officials on the spot. We keep things in perspective. It shows the power of the board. It could have a bad influence if we embarrass people. We want to be respectful, professional. In Indiana, we have education-based athletics, so we’re doing the same with broadcast.”

The students also created a virtual ‘Spin to Win,’ a sponsored game that highlights different businesses that give away products and services to a different fan each night. It’s become a fun way to feature sponsors, and the fans are entertained, connected and involved.

The school has found many other ways to use their video board as well. For example, during track meets, they can show instant results, so athletes know right away when they set a personal record or made it to the next level of competition. The school hosted the Special Olympics, and athletes were delighted to see themselves featured on the big screen. They also did CPR training on the football field and showed demonstrations on the board.

“We are always looking for those slivers of opportunity,” explains Huppert. “We want to do football training for referees. We could show videos and demonstrations and do fundamentals. It’s the perfect tool for that. We haven’t done it yet, but it will happen. It’s about education, not just football.”

Mishawaka has also used the video board to memorialize some of the greats of the game, showing photos of a football coach and an Indiana AD who passed away.

“We put up a graphic, we didn’t just turn on lights,” says Huppert. “We wanted people to know what was happening, and we pay tribute to them. It meant a lot to people that we honored their lives.”

Advice for other schools: Think BIG

“The biggest piece of advice I’d have for other schools is, don’t be shortsighted,” says Huppert. “It’s not just a football scoreboard. It’s a vehicle for communication about the school. It is exciting. You can tell the story of the school board, what we’re doing for safety, stories about the kids. It has the potential to be whatever you want to make it. It’s a learning tool – that’s what we’re in it for.”