Learning About the Sanford Pentagon Operations with Chad Hunt

We caught up with Chad Hunt from the Sanford Pentagon to talk production in multi-use facilities. 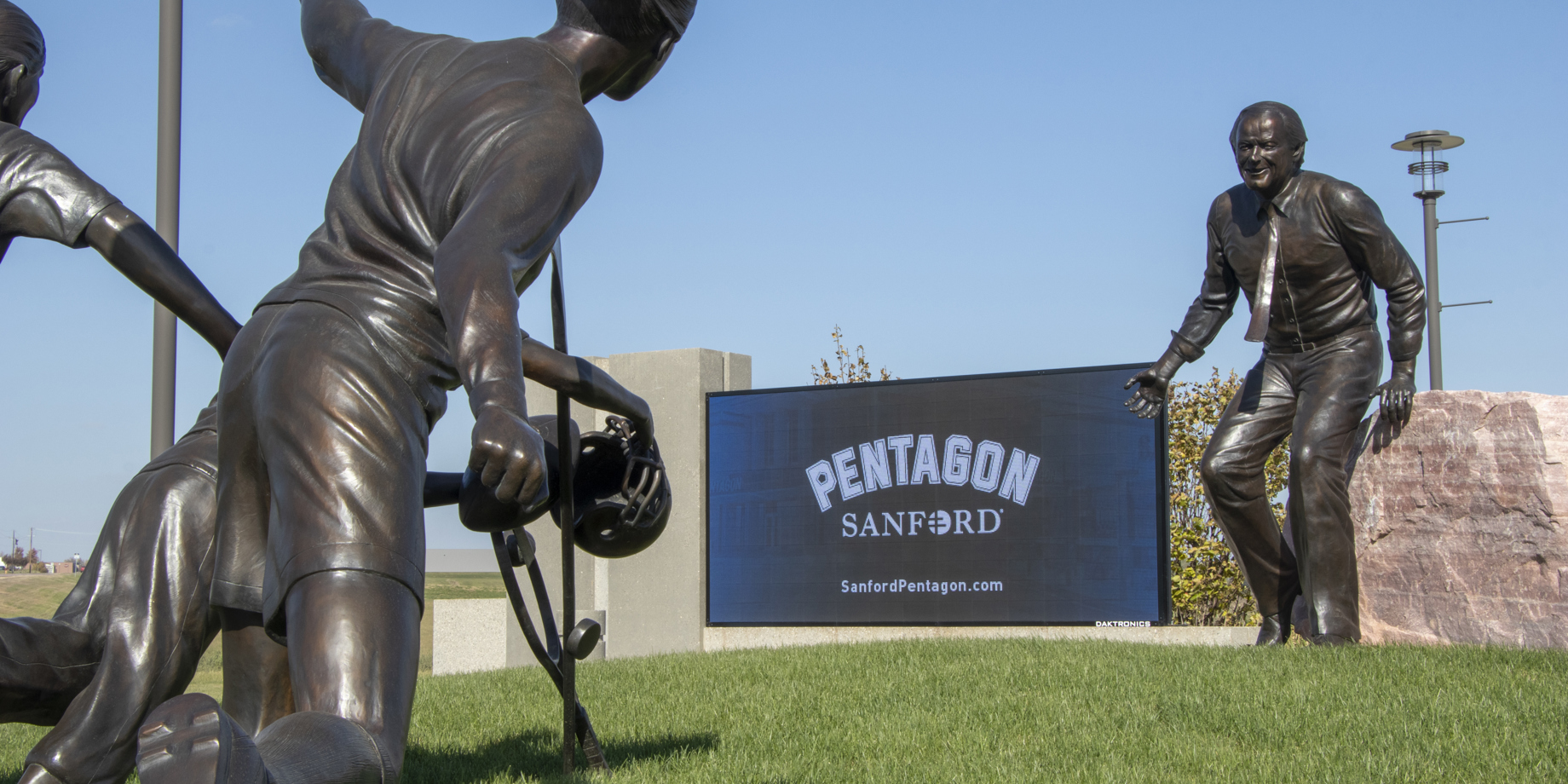 Matt and I recently sat down with Chad Hunt, Daktronics Digital Video Manager at the Sanford Pentagon, for a conversation on The Daktronics Experience podcast. Chad explained the different events they host, how they staff their productions and more.

Justin: Chad, can you tell us a little about yourself and your role at the Pentagon?

Chad: Yeah. I started as more of a mascot wrangler and on the game entertainment side of things, and then I got my eyes on the video board and control room. I asked my boss if I could transition a little bit and get my feet wet with the video board production. She said she could get me in there and I did 2-3 months of that before I moved back to Sioux Falls and got a job with the Sioux Falls Sky Force. I worked there for a couple of years and transitioned to Midco Sports Network and got into the live TV world as a producer and videographer. And then this job at the Pentagon opened up and I have been here since it opened in 2013.

Justin: Can you tell us about the variety of events you host at the Pentagon?

Chad: Yeah, that’s why I love my job. It’s different every day. We host a wide variety of events. Basketball would be our primary one, a handful of volleyball matches, wrestling, MMA fights, concerts, banquets and we’ve even hosted a wedding here before. There is definitely a wide variety; it really keeps me on my toes.

Justin: Do you have to change your show quite a bit from one event to the next? Or does it depend on who is coming in and what event it is?

Chad: Good question. It does kind of depend on who is coming in and how much of an in-house show they have. For example, with the MMA fights, they will come in with the TV truck and it’s primarily for the TV audience. But then they will give me a feed from their truck to display on the in-house boards while they control kind of what goes on there. So, I will still be there and help plug stuff in but, essentially, they are running that show. As far as our events go, we transition from basketball games to volleyball games to concerts. And a lot of that just depends on what it is and how much we want to get involved with in-house production.

Chad: Yeah, especially for concerts. That’s the most popular. Those are some of my favorites, especially if we can use our crew and staff. A lot of times they will come in, set up the stage and projector screens, and then we are able to plug in from our equipment to show the live video during the concert. Usually, I’ll be the technical director and we’ll have 4-5 camera operators that are right there on stage. It’s nice to be doing something different.

Matt: What is your control room set up like for these events?

Chad: For the general basketball/volleyball set up, we will have one producer, which is usually myself. Their role is to follow the game script to make sure everybody is on the same page with sponsor elements, time outs, videos, etc., and they are sitting next to the director or technical director and talking with the camera operators. So, they are basically telling them what to shoot.

Next to them, we have our replay. They are looking for good plays, dunks, 3 pointers, etc., and they can rewind and queue those up in an instant. I put a lot of pressure on our replay operators in the last couple of years with building pre-game packages. So, we will incorporate an intro video, a pre-produced package. Then the second half of the video would be shots of the teams warming up that just took place ten to fifteen minutes prior. The replay operator is looking for cool dramatic footage and then we will slow it down to 50 percent.

Then next, we have the Show Control operator. Their job is organizing the Show Control computer with the game script and then executing the full-page sponsor graphics and our stats, headshots, in-game animations and things like that. Typically, we will have three manned cameras and two or three unmanned cameras. Whether it’s a PTZ like we have now mounted above the centerhung or a GoPro on the backboards.

Justin: We heard that you came up to Brookings for the Daktronics Video Summit earlier this year, is that right?

Chad: Yeah, I attended the User Group back in January. I wanted to see what everybody is working on and kind of what the new products are these days. It’s just always good to talk to your colleagues. Even if you host different sports, you are all doing the same thing. So, it was good to pick their brains and have some good conversation.

I don’t get out to live sporting events as much as I would like to. But you do your homework. You go to a Twins game or a Timberwolves game around here. It’s hard to go to a game and enjoy myself without staring at the video displays and think, ‘Hey, how did they do that?’ Or, ‘That’s a great idea!’

To hear more about productions at the Sanford Pentagon and multi-use facilities, check out the full conversation with Chad by clicking here. 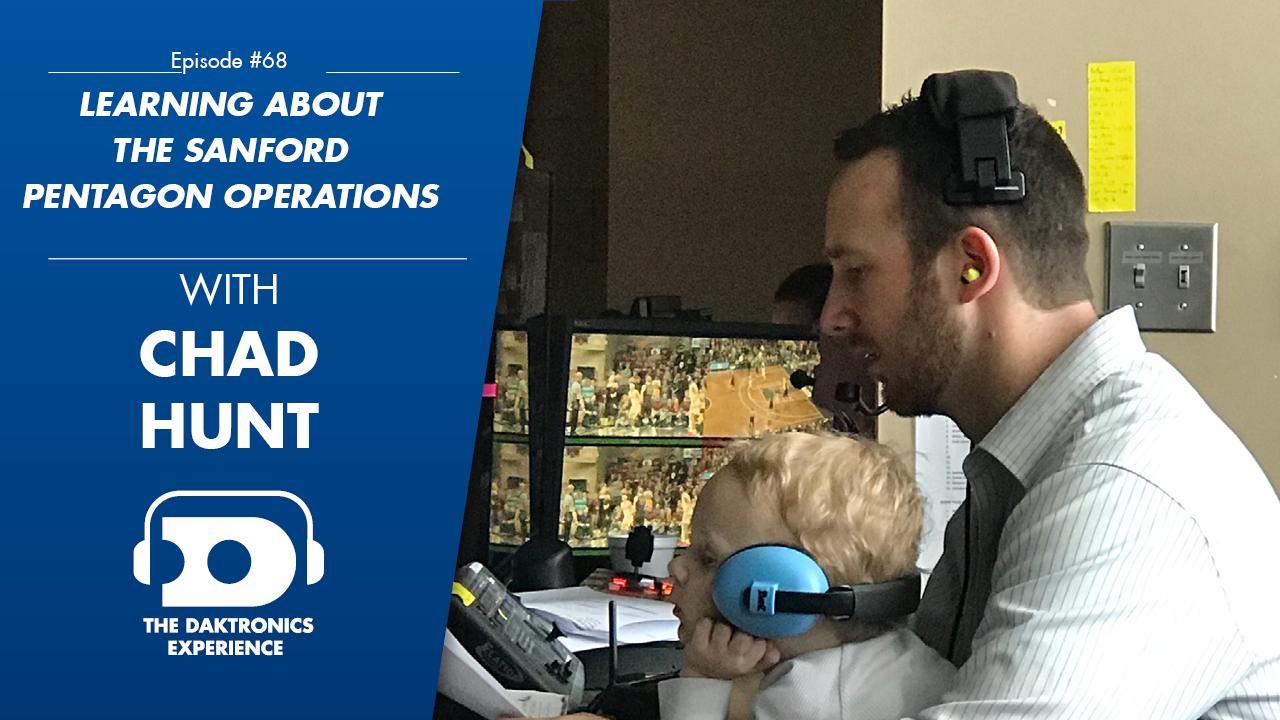 Previous Article: 4 Tips for Elevating Your Sales This Summer
Next Article: Engaging Fans at MLB Games and Beyond: A Conversation with Trisha Schuver
View Blog List