A Conversation about Joint Medical Operations Center: The Future of Tele-Critical Care

On the Daktronics Experience podcast, we recently sat down with a couple of our partners, Andrew Stone, Program Manager for SOLUTE, and John Sublett, Federal Sales for Crown Point Systems, to discuss our recent work together at the Joint Medical Operations Center at the Balboa Naval Medical Center in San Diego, California, and other military […] 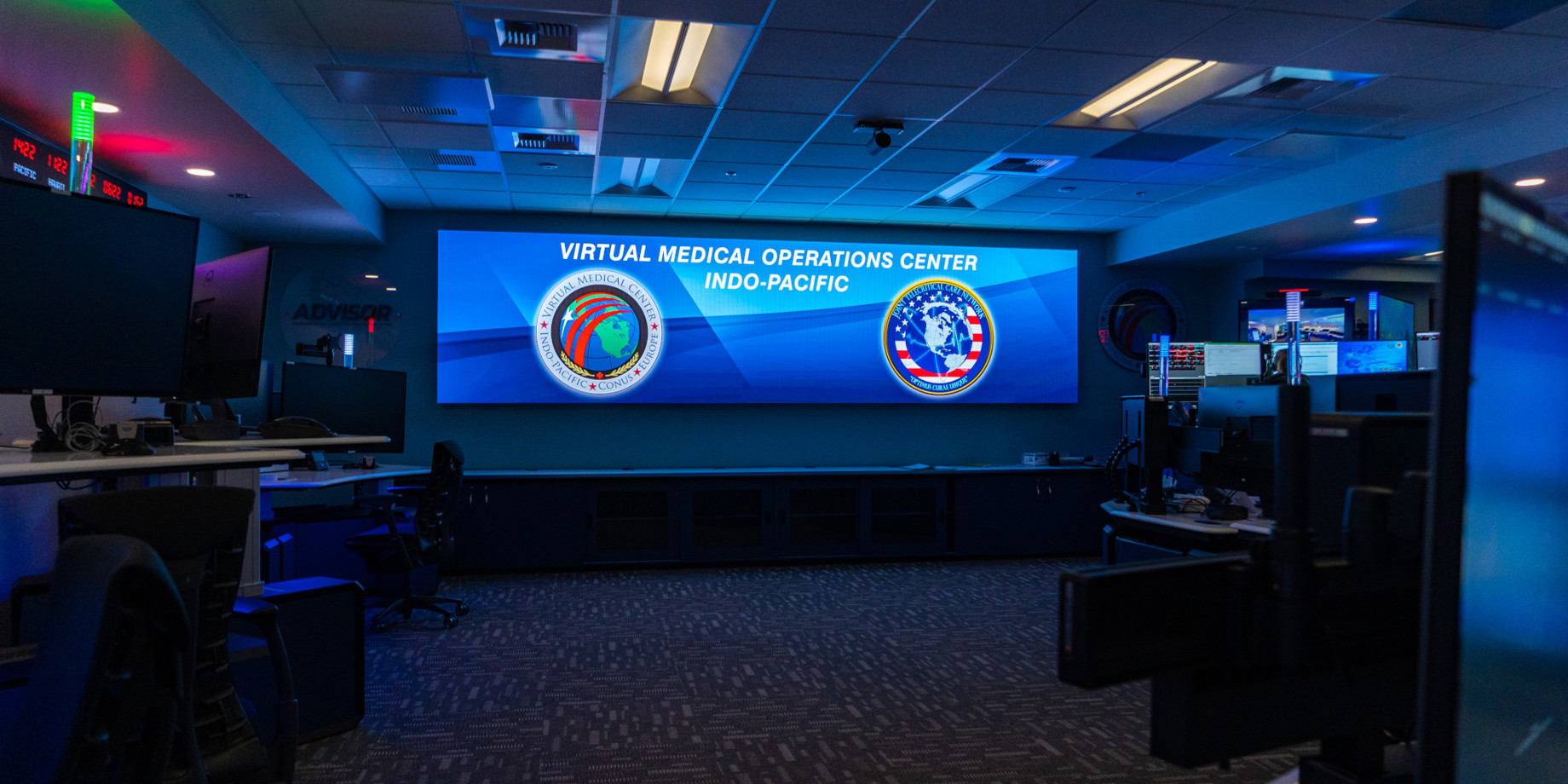 On the Daktronics Experience podcast, we recently sat down with a couple of our partners, Andrew Stone, Program Manager for SOLUTE, and John Sublett, Federal Sales for Crown Point Systems, to discuss our recent work together at the Joint Medical Operations Center at the Balboa Naval Medical Center in San Diego, California, and other military and government installations.

Can each of your you give us a little background of your position and your company?

John: I’m the director of federal sales with Crown Point Systems, which has been around since roughly 2004 and is headquartered in San Diego; we have employees across the country. 99% of the work that we do is for the Department of Defense or the Intel community. I’m the director for Federal Sales and have been with the company for about a year and a half.

Andrew: I’m the program manager with SOLUTE. I’ve been with the company for about 3 1/2 years now and transitioned right into this position after doing 24 years as a naval officer. SOLUTE is categorized as a service-disabled veteran owned small business.  Our core competency is software development, but we also do system engineering and network engineering and we actually purchased a UAV company about two years ago, so we make UAVs as well.

What can you tell us about Joint Medical Operations Center project in San Diego?

John: In the early phases of the project, I worked along with NIWC, the design entity that designed the operations, and SOLUTE became the prime and is responsible for the overall contract and the installation. Crown Point’s role was to support SOLUTE and NIWC in installing programming, not only the Daktronics wall, but also the infrastructure, video conferencing and some of the audiovisual aspects of the room.

Andrew: JMOC (Joint Medical Operations Center) is the overarching contract that what we did over at Naval Medical Center San Diego we installed what’s called a VMOC (Virtual Medical Operation Center). The VMOC is the primary center for tele-critical care for the Navy medicine enterprise. This is going to be the crown jewel for tele-critical care. Within the space we have multiple workstations and nursing staff as well as a couple of medical doctors and some other staff members will be conducting tele-critical care. The VMOC consists of custom graphical interfaces, high-end audiovisual systems, multiple video teleconferencing systems and large displays feeding content to assist the Navy and tele-critical care operation.

The video wall is where everything will be displayed for all the staff members to observe whether that’s patient monitoring, news feeds, etc. One central point of contact for the tele-critical care staff to do their jobs. The big thing with the custom layout of the wall, the staff with the multiple video feeds that are going to be able to be presented on the wall, these are going to be used for life-saving support and training. So the whole point of the VMOC is for these nurses and doctors to provide critical training or critical support to forces that are on the other end of the globe. Right now it’ll be used as a visual reference as medical staff gives pointers or talks someone through doing a procedure.

Another part of the VMOC we’re still in the process of getting up and running is the virtual reality component of the room. During the install, I also learned there’s a robotics part that’s still being worked on. They actually brought in this console that surgeons use and this system can remotely connect a surgeon in San Diego, they can go plug themselves in and actually conduct surgery that’s in another state or another country using robotic arms. It’s incredible where technology is nowadays.

One of the key components of this is also training, and that’s where the VTC comes in. VTC was one of the priorities for them because they do so much of this training now. The training I’m talking about now that will definitely be displayed up on the big board and will have heavy use for the training across the board for the enterprise.

As part of your work with Daktronics, you had an opportunity to visit our headquarters in South Dakota. How did your perception of Daktronics change when you visited the factory in Brookings?

John: If you really want to compare manufacturer to manufacturer in the direct-view LED world, go to the site if you can, because it is a no-kidding factory. It’s not smoke and mirrors like some of the others are; it’s TAA compliant, which is a requirement for this type of application for the government.

You guys are putting LEDs on the boards right there in the facility and testing happens there. It’s an entire process, and it’s legitimate as opposed to other places that I’ve been in my 25 years of experience. At other places, it really is, “We’re testing some stuff here, but you can’t really see where the assembly happened or how it happened,” and for the market that Andrew and I work in, that is critically important to have control in the manufacturing process. We have foreign governments that are trying very hard to gather information and they have been very successful with the technologies that we use. Security is just absolutely critical in the environments that we’re working at now and you guys have a pretty stellar process.

In the past, LCD was common in this type of application, but direct-view LED has grown in popularity. What performance differences have caused this shift?

John: The problem with LCD is, especially in a medical application, imagine if you’re trying to do patient evaluation and there’s a big seam in the middle of the information you’re trying to look at. With the NPN line, there are no seams and you’re not seeing any pixel loss. It used to be LCD, but we just don’t install that anywhere anymore.

Andrew: The image quality difference also came up when we were testing out the cameras. We dialed into one of our distant sites in Texas and I’m looking at the screen thinking “wow, this is like extremely clear” and then someone on the team said “Hey, check this out,” and they zoomed in and we were able to read this tag, had to be maybe an inch or two inches and they mentioned this was really important because they needed to be able to zoom in anything on the patient’s bracelet.

John: If you’re doing a surgery, you can only imagine you really need no pixel loss. The bandwidth has to be substantial to be able to accommodate that. But it’s also things like color reproduction; if you’re evaluating the color of a result or blood or any of those things, it has to be accurate, so all those things matter in the technology that’s being used for the remote position.

So we’ve been talking about JMOC, but there are other military and government facilities that are installing similar products from Daktronics as well. Are the reasons to go to LED the same for those facilities?

John: Some of those same qualities are very important across the board. I believe we’ve installed 4-5 Daktronics walls in the last year at various military installations or government agencies, and some of those are top secret environments, some are classified, some are unclassified, and certainly the TAA and BAA compliance is a requirement in most of those. Then, you consider quality and performance. It has to work; that’s a given. Supporting the display so it works requires some different things and Daktronics has really learned how to support the federal government. Previously, the typical support was dialing in remotely and troubleshooting. Well, in the environments that we’re talking about, that’s not possible. I can’t walk into these environments with the laptop or a cell phone, or a communications device to be able to reach back to Daktronics, necessarily. Daktronics has put together the ability to have spares and those kind of things on site and/or at depots so that we can get that technology replaced if we needed to, or that support locally.

Are there any specific considerations that need to be taken when working on a military/government project such as this?

John: There are so many different requirements to be able to get into those upper rooms, and in many cases that equipment can never even leave, so we have to, or the government actually has to, destroy the equipment as opposed to it coming back out and going to Daktronics for repair. From the first time that I got to visit the facility at Daktronics there in South Dakota, all of the products that I had seen were BAA compliant. There was some experimental stuff that was being worked on and everything else was fine, but we notice that the power supplies for example were not BAA compliant. I just happen to have the discussion with some of your folks there with engineering and it was shocking but within two weeks they had already made a shift and corrected that. So it was just kind of a lesson learned for all of us to, you know, this really has to be clean all the way through to make it in some of these facilities.

What video wall applications are you looking forward to working with in the future? Where do you think LED technology will expand to in military applications?

John: As far as a new applications, we do a lot of tactical operations (everything from mobile trucks or mobile “skiffs”) which are essentially mobile command centers. They’re either in a big RV-type vehicle, or we also have direct view LED that we need to put into cases with what they call “program of record” and those would go into tents. In the GMOC application, there are remote people that could need surgeries. I don’t think we’re going to be dragging a video wall out there necessarily, but at some of these bases and camps and tents we do absolutely need to have that type of seamless digital technology. So the challenge that comes along with direct-view LED out in the middle of the desert is powder and sand right? Can it handle the environment, the heat? So all of those things are part of it. I can tell you that we’re doing it today already, but direct-view LED can be a little bit delicate too as far as handling, so you don’t want a bunch of Marines slamming these things in and the next thing you know, you’re missing pixels. We’re already talking to Daktronics about some acrylics and some other things to put on the direct-view LED to make those a little more durable and then deploying those out into tactical environments.

Andrew: Now I’m just thinking about back when I was in the Navy and I just remembered the large screen displays that we used seven or eight years ago. They were good. They were fine. I think they were actually projectors, but you know something like this would definitely aid the war fighter and make sure that you know they have good situational awareness and have a nice, solid, clear, concise picture, so I definitely see a lot of possibilities there moving forward.

Thank you John and Andrew for joining us on the Daktronics Experience! Check out the full podcast here.