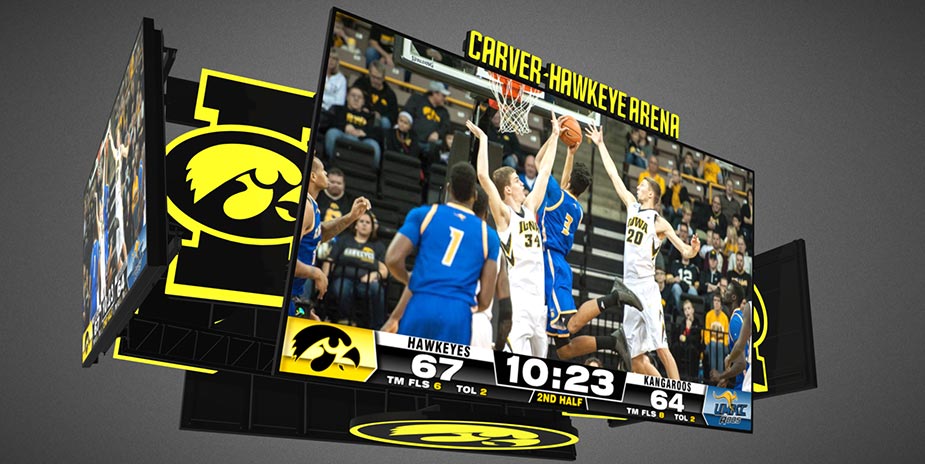 University of Iowa Turns to Daktronics For Video Upgrades On Campus

BROOKINGS, S.D. – July 12, 2016 – Hawkeye fans, players and coaches will be wowed by new LED video technology from Daktronics (NASDAQ-DAKT) of Brookings, South Dakota, when the fall sport season begins at University of Iowa's Carver-Hawkeye Arena in Iowa City, Iowa. The system, with original designs by Anthony James Partners, will be manufactured and installed by Daktronics this summer.

"Carver-Hawkeye Arena remains one of the great college athletic venues and we are excited to work with Daktronics on upgrading our scoreboards," said UI director of athletics Gary Barta. "Adding state-of-the-art video and audio equipment will make the student-athlete and fan experience even greater. Hawkeye fans make Carver-Hawkeye Arena a special place and these enhancements will no doubt bolster the environment moving forward."

These displays are capable of variable content zoning which allows them to show one large image or to be divided into multiple zones to highlight any combination of live video, instant replays, statistics, game information, animations and sponsorship messages.

The five auxiliary displays and 8 digital scorer's tables will feature 10 millimeter line spacing. They are also capable of variable content zoning as they provide fans with supplemental content and statistics as well as creating opportunities to highlight sponsors throughout events.

"We appreciate the opportunity to once again partner with the University of Iowa," said Matt Warnke, Daktronics sales representative. "This is an exciting new installation which includes a centerhung being installed for the first time in Carver-Hawkeye Arena that not only highlights our state-of-the-art technology but also our depth of engineering expertise. This new system will enhance an already great game-day environment and we look forward to seeing the system installed later this summer."