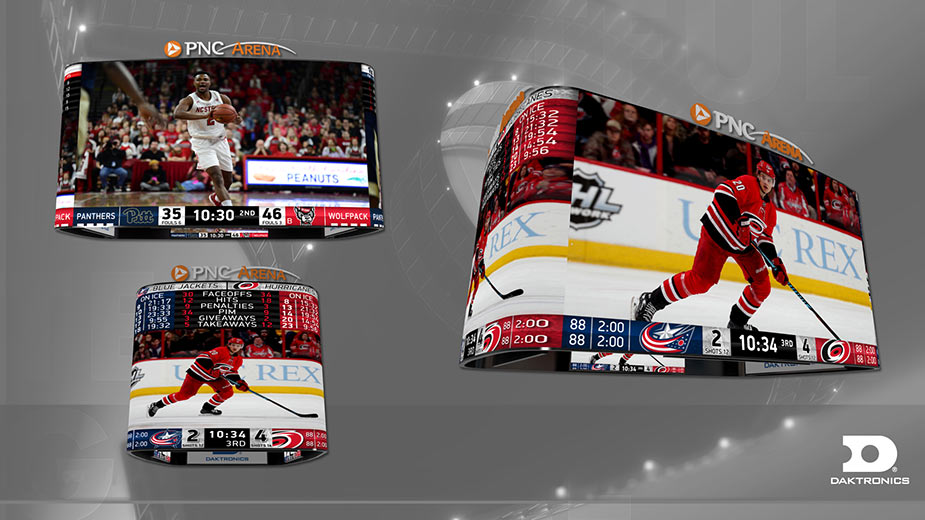 New centerhung is 180% larger than the existing system

BROOKINGS, S.D. – Apr. 12, 2019 – Daktronics (NASDAQ-DAKT) of Brookings, South Dakota, and The Centennial Authority, owner of PNC Arena, are partnering to install a 4,000-square-foot centerhung LED display system by the start of the 2019-20 hockey season to enhance the fan experience at Carolina Hurricanes hockey games, NC State University men's basketball games and other special events held at the facility. The centerhung is nearly three times larger than the existing system and adds to the already-installed 5,250 square feet of digital displays at the arena.

"We are committed to maintaining PNC Arena as a first-class facility and providing enhancements that create the best possible fan experience for all events," said The Centennial Authority Chairman Thomas McCormick. "We are excited to unveil the new centerhung scoreboard at the opening of the 2019-2020 Carolina Hurricanes and NC State men's basketball seasons."

The centerhung is curved around the corners to provide a large, single canvas presentation that is HDR ready and capable. This single canvas presentation will measure approximately 25 feet high by 148 feet wide and will feature 5.9-millimeter line spacing to bring high-resolution imagery to fans throughout the arena. Each side of the centerhung provides a 25-foot-high by 47-foot-wide viewing experience while each end measures 25 feet high by 27 feet wide.

"This new video system will bring a larger-than-life experience to fans and event attendees at PNC Arena," said Daktronics President and CEO Reece Kurtenbach. "We're excited to work with PNC Arena, the Carolina Hurricanes and NC State to bring this improved visual centerpiece to their events. As the fan experience at live events continues to be paramount, our team remains dedicated to providing the best possible solutions for our customers to help them exceed their entertainment goals."

Two displays will be mounted to the underbelly of the centerhung to appeal to fans, players and coaches sitting courtside. Each display will measure approximately 10 feet high by 20 feet wide and will feature 3.9-millimeter line spacing to provide optimized resolution for those viewers.

The main display features variable content zoning allowing it to show one large image or multiple zoned images. Live video, instant replay, statistics and game information, graphics and animations, and sponsorship messages can all be shown simultaneously or take over the entire display in coordination with specific moments during the event.

Home to the Carolina Hurricanes of the National Hockey League (NHL) and NC State University men's basketball program, PNC Arena is a multi-purpose sports and entertainment arena that hosts more than 1.5 million guests and over 150 events each year. PNC Arena opened in October 1999 and accommodates 20,000 based on the event configuration. The arena is owned by the Centennial Authority and managed by Gale Force Sports & Entertainment. PNC Arena (www.ThePNCArena.com) is located in Raleigh, NC.

About The Centennial Authority

The Centennial Authority was created by an act of the General Assembly in 1995 to study, design, plan, construct, own and operate a regional, multi-purpose facility, which was to become PNC Arena and home to tenants NC State Wolfpack men's basketball and the Carolina Hurricanes hockey franchise. Twenty-One members serve as a volunteer board appointed by leaders from the State of North Carolina, Wake County, the City of Raleigh, and the Wake County Mayors. The Chancellor of NC State University serves in accordance with the authorizing statute. Since arena opening on October 29, 1999, the Authority, as owners, continue to provide facility oversight, finance monitoring, operations, upgrades, new additions and all activities associated with owner responsibility of ensuring this multi-million-dollar, multi-purpose arena will remain a first-class facility for the people of the state and region that it serves.

For more information on the Centennial Authority, visit: www.centennialauthority.com.