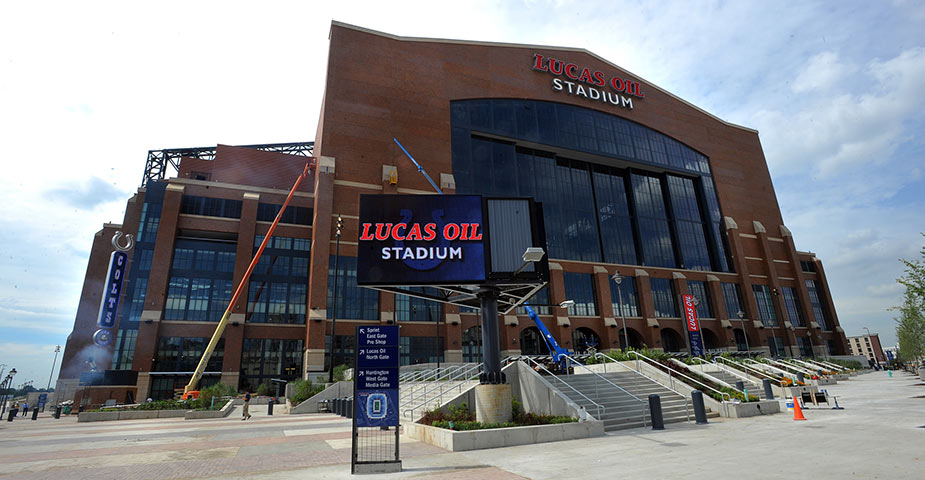 BROOKINGS, S.D. – Mar. 15, 2021 – When the madness of March tips off for the men's and women's collegiate basketball tournaments in Indiana and Texas, Daktronics (NASDAQ-DAKT) of Brookings, South Dakota, will have equipment at nine venues and service personnel to support the events.

Building a bubble in Indiana, the men's tournament will culminate at Lucas Oil Stadium where a champion will be crowned. Leading up to the finals, games will be played at six different locations in Indiana with four of those venues featuring Daktronics products and services. Those venues include Lucas Oil Stadium, Purdue University's Mackey Arena, Indiana Farmer's Coliseum and Indiana University's Simon Skjodt Assembly Hall.

Practices will be held at the Indiana Convention Center which will feature 12 courts. It was recently outfitted with Daktronics equipment including scoreboards, shot clocks and controllers to be used for each teams' practice needs.

"It's awesome for Daktronics to be a part of sports coming back, including these national collegiate basketball tournaments in Indiana and Texas," said Will Ellerbruch, Daktronics national sales manager for live events. "From practice to competition, our equipment and services are helping our college customers. Specifically, we were asked to help create one of the largest practice facilities we've seen in Indiana to help these teams safely prepare and be the best they can be in this competition."

Heading down to Texas, the women's tournament will take place at five different venues, all featuring Daktronics equipment to support all 63 games. The final game will be played at the Alamodome which features Daktronics video displays and scorer's tables as well as new shot clocks and a scoring system to enable two courts to host games inside the venue. The other venues include Bill Greehey Arena at St. Mary's University, Frank Erwin Center at the University of Texas, University Events Center at Texas State University and UTSA Convocation Center.

"With more than 60 teams in each of these huge bubbles for one of the most-watched sporting events of the year, it really makes the tournaments a little bit more exciting for us," added Ellerbruch.

Daktronics has a long history in collegiate sports and venues hosting the men's and women's basketball championships as well as equipment supporting many local businesses in and around these event venues and the surrounding communities.