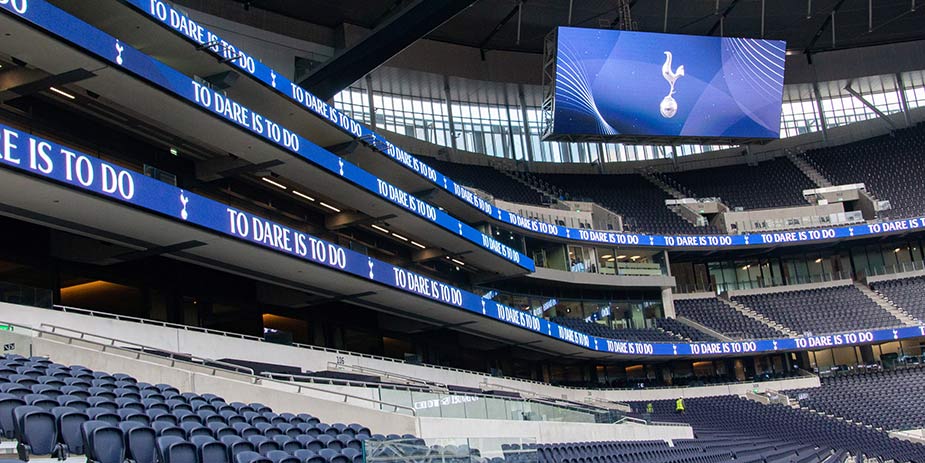 BROOKINGS, S.D. – Apr. 3, 2019 – Daktronics and Tottenham Hotspur continue to partner for LED displays in and around the club's iconic new stadium in London for a complete street-to-seat visitor experience. The East and West Atriums, Tottenham Experience, Paxton House, Auditorium and external wayfinding locations have all received LED displays ahead of the opening Premier League match to be staged at Tottenham Hotspur Stadium. This installation is in addition to the previous project announced in 2018 for main video and ribbon displays around the stadium.

"These market-leading displays support our commitment to delivering an unrivaled fan experience, helping to engage fans from the moment they arrive at our new home," said Tottenham Hotspur Director of Operations Matthew Collecott.

A wealth of LED displays will be visible across the campus to support fans in reaching their desired location from the moment they arrive outside the stadium until they reach their seat, including two large, 234-square-meter displays featuring 13HD pixel layouts mounted to the stadium façade to welcome fans as they arrive, as well as 54 flag-style displays and 17 single totem-style displays. 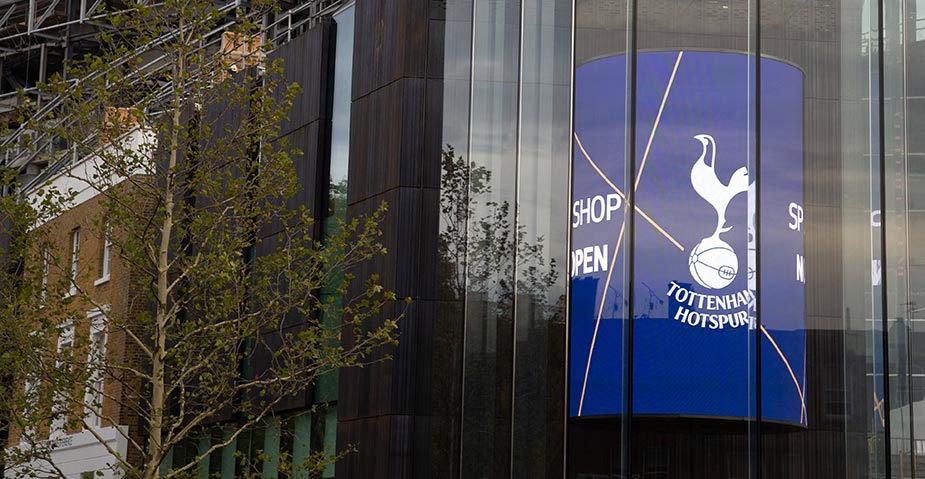 As fans reach the East and West Atriums, they will be greeted with approximately 200 square meters of wall-covering display space with 4-millimeter line spacing. These displays will help brand the venue, engage fans and immerse them in the live event experience.

"Immediately upon entering Tottenham Hotspur Stadium, you are welcomed with a wall of video targeted specifically for the fans and programmed to kick off the excitement that awaits them inside the bowl," said Pete Egart, vice president of Europe, Middle East and Africa markets for Daktronics.

The stadium's auditorium display will afford the club the flexibility to use the space as a multi-purpose facility for events such as press conferences, presentations and private screenings.

Rounding out the project, 15 locker room clocks and four delay-of-game timers will be installed at the stadium to accommodate American professional football standards for hosting these events at Tottenham Hotspur Stadium.

"The Tottenham Hotspur Stadium team has reinforced its commitment to a fan first approach," Egart continued. "The integration of technology combined with the commitment to preserving the history and culture of their storied club will ensure a unique and breathtaking experience for all visitors to the new stadium."

Founded in 1882, Tottenham Hotspur Football Club has a tradition of playing an entertaining and attacking style of football. The team has achieved five top-five Premier League finishes in the past seven seasons and has a multi-national squad of players. Tottenham Hotspur also has: