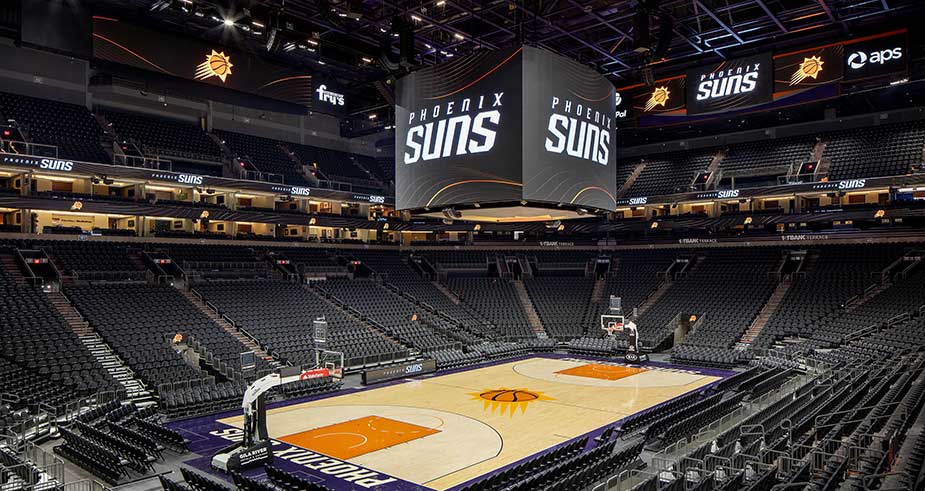 BROOKINGS, S.D. – Jan. 28, 2021 – Daktronics (NASDAQ-DAKT) of Brookings, South Dakota, has partnered with the Phoenix Suns to manufacture and install an 18-display LED super system totaling 55.1 million LEDs, including a new centerhung configuration as well as lobby, ribbon, tunnel, scorer's table and locker room displays. The installation was completed in 2020 and in use as basketball is played at Phoenix Suns Arena in Arizona.

"A renowned leader in digital displays, Daktronics has been instrumental in the significant transformation at the reimagined Phoenix Suns Arena," said Phoenix Suns President & CEO Jason Rowley. "When we welcome fans back to the home of the Phoenix Suns and Phoenix Mercury, they'll be surrounded by remarkable technology that will truly elevate the fan experience at every turn."

The centerhung, which is six times larger than its predecessor, features four LED video displays, two facing the sidelines and two facing the ends of the arena. The sideline-facing displays each measure 25 feet high by 33 feet wide and the end-facing displays each measure 25 feet high by 29.5 feet wide. All four feature 5.9-millimeter pixel spacing to bring crisp, clear imagery to fans in every seat of the arena. The entire centerhung features 3,100 square feet and it would take 292 60-inch televisions to cover the entire centerhung's digital footprint.

"The fan experience at live events remains a crucial element for professional sports teams," said Daktronics President and CEO Reece Kurtenbach. "This LED installation for Phoenix Suns Arena will bring fans a next-level experience and we're excited to be a part of the reimagination of their arena." 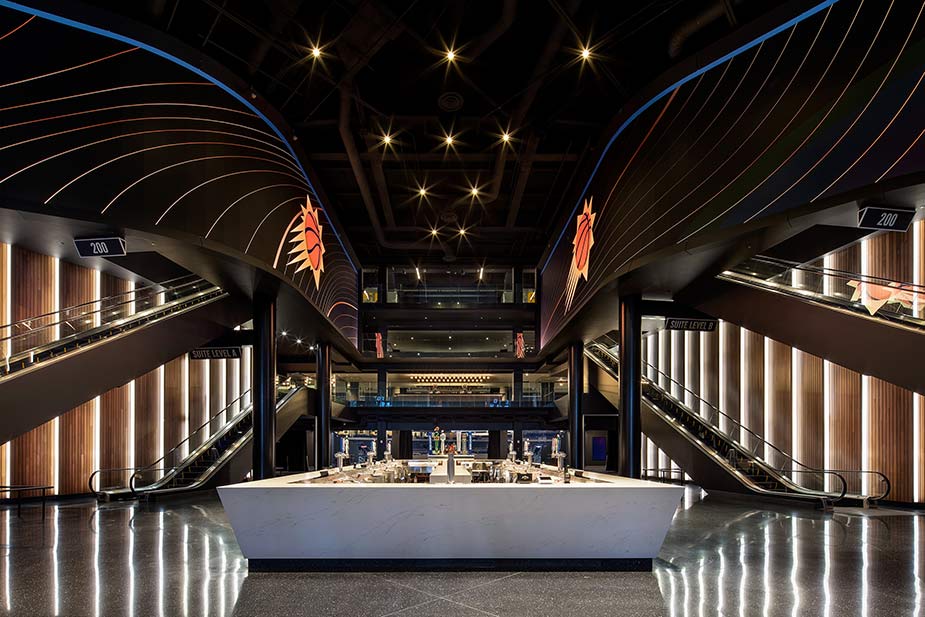 Two custom-shaped lobby displays combine for more than 6,700 square feet of digital space to welcome fans into the arena. One display measures approximately 26 feet high by 202 feet long and the other measures approximately 26 feet high by 113 feet long. The height of each display fluctuates as they curve and wind their way into the main seating bowl. Both displays feature 3.9-millimeter pixel spacing to provide high-resolution imagery at close viewing distances.

"The Suns are catering to their fans in multiple locations outside of the main seating bowl as evidenced by their two new lobby displays," said Kurtenbach. "As the fan experience spills out into the concourses and other gathering areas in event venues, adding technology to connect with audiences in those areas has become increasingly important to team and sponsor branding. This installation will be a great example of improving opportunities to connect with people in those areas."

The centerhung displays are capable of variable content zoning allowing each to share one large image or they can each be divided into multiple zones to show any variety of content including live video, instant replays, up-to-the-minute statistics and game information, graphics and animations, and sponsorship messages.

The Suns' locker room and training facility each feature a display with 1.5-millimeter pixel spacing. These displays can be used to show replays of the action and to help with preparation for the game and the Suns' current or upcoming opponent.