From Street to Seat, Daktronics Lights Up Fiserv Forum

The Milwaukee Bucks new home, Fiserv Forum, features an integrated LED system with over 60 displays in-bowl, around the concourses and outside the arena. 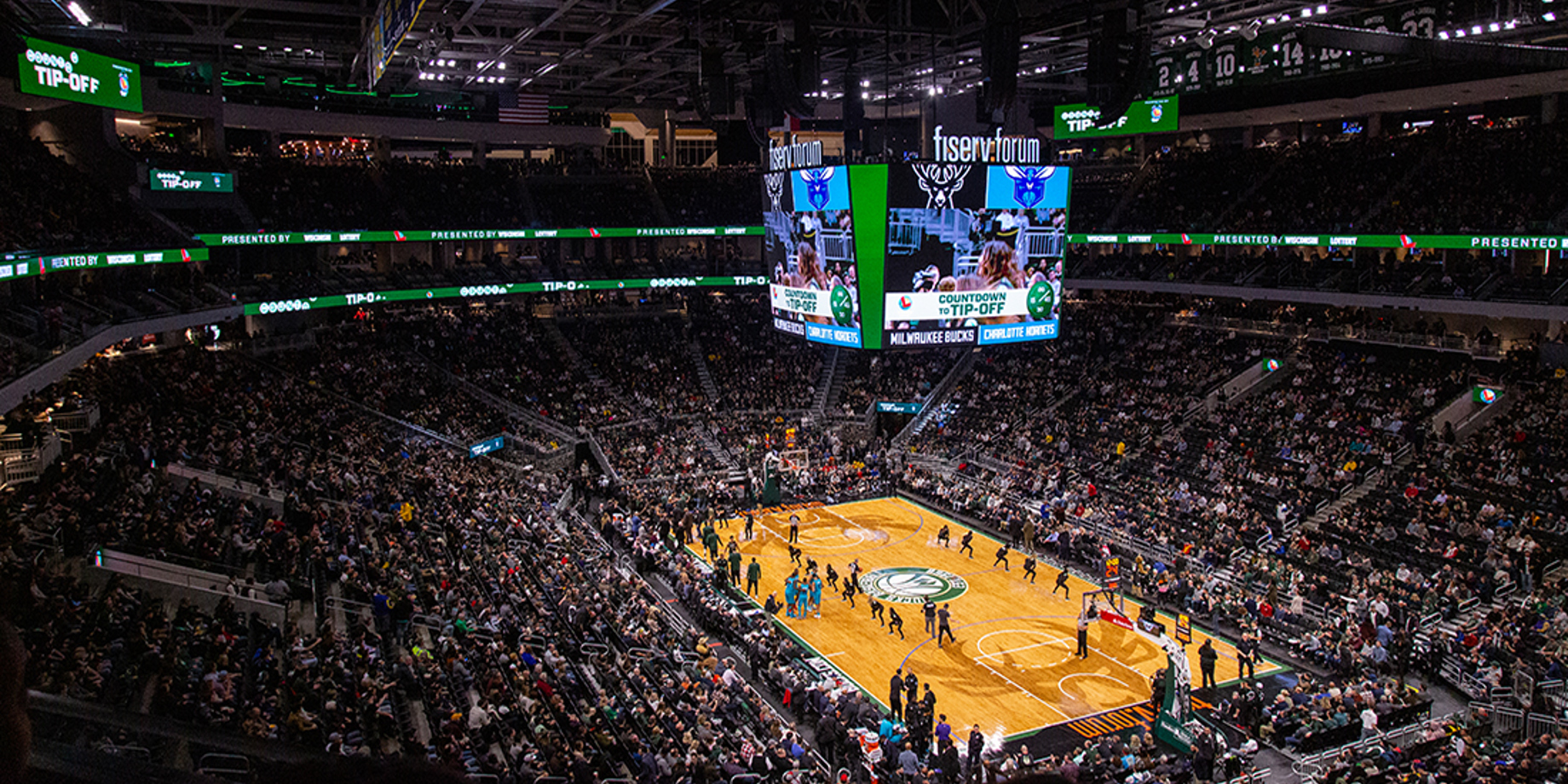 Sporting and entertainment venues continue to look for opportunities to entice fans to arrive at the venue earlier, stay later and engage them every step of the way. At Fiserv Forum in Milwaukee, over 60 new Daktronics displays help in their efforts to inform and entertain audiences from the street to the seat.

Home to the Milwaukee Bucks, Marquette University men’s basketball, and many other sporting and entertainment events, Fiserv Forum features an integrated LED super system in-bowl, around the concourses and outside the new arena.

As fans arrive at the arena they are welcomed by several Daktronics displays. On the Northwest corner of the arena, Daktronics versatile exterior LED freeform stick product provides a dynamic design appearance and see-through application. The 15’ x 87’ display wraps around the corner of the arena adding to the architecture of the building.

Across the street from the arena, several Daktronics displays light up the 5th Street parking garage. The most noticeable is a curved 40’ x 38’ video display informing and greeting guests as they approach on the street. Additional ribbon boards complement the digital displays on the parking garage.

Entertaining fans doesn’t start when the game starts. It truly begins hours before the game when fans arrive at the arena and lasts hours after the game ends. The Bucks are the latest team to add LED displays in prime entertainment areas outside the venue as a social gathering area for fans. The Entertainment Block Beer Garden features a 17’ x 30’ LED display used for all kinds of social activities. In addition, Daktronics will soon be installing four LED displays inside a separate bar located next to the Beer Garden and directly across from Fiserv Forum’s main entrance.

Venturing inside the arena, the concourses at Fiserv Forum feature several Daktronics displays helping to convert what would be blank spaces around the arena into digital inventory with creative LED solutions.

As fans enter the main lobby, they are greeted by a large 4mm curved display. The 12’ x 44’ lobby display creates an opportunity for interactivity with fans as well as to immerse them in Bucks pride immediately as they walk through the main gates. The display has already been recognized as offering the most “Instagramable” moment at the arena.

Also around the concourses, the Retail/Team Store showcases a curved 4mm display, and riding up one of the main escalators to the second level, the large Supershaft display provides even more digital inventory for the Bucks.

As the Bucks players head out to the court from their locker room, a 4mm player entry display gets fans excited and showcases the team as they take their last turn to the court.

In-bowl, the Daktronics integrated system is highlighted by the largest equilateral centerhung display in the NBA, which covers more than three-fourths of the basketball court. The 24-display centerhung configuration features over 4,000 square feet of video displays. The four main displays each measure approximately 25′ x 29′ and feature 6mm line spacing to provide high-resolution imagery to fans throughout the arena.

Other displays in-bowl include four large 10’ x 36’ boards located in the corners of the arena to help supplement information such as game stats, out-of-town scores, awe-inspiring graphics and sponsorship messages.

After the game, Bucks press conferences inside the Interview Room are held in front of a 1.9mm high-resolution digital LED backdrop. A growing sports broadcast trend is using LED displays as press conference backdrops instead of static canvas. LED is the preferred option because it looks great in front of TV cameras with superb color, resolution and clarity, and sponsors’ content changes seamlessly with the click of a button.

What changed this whole relationship with us was customer service. They became a partner. They became integrated with everything we were thinking and doing.