A Light Show on Campus at the University of Georgia: A Q&A with Event Producer Anna Pence 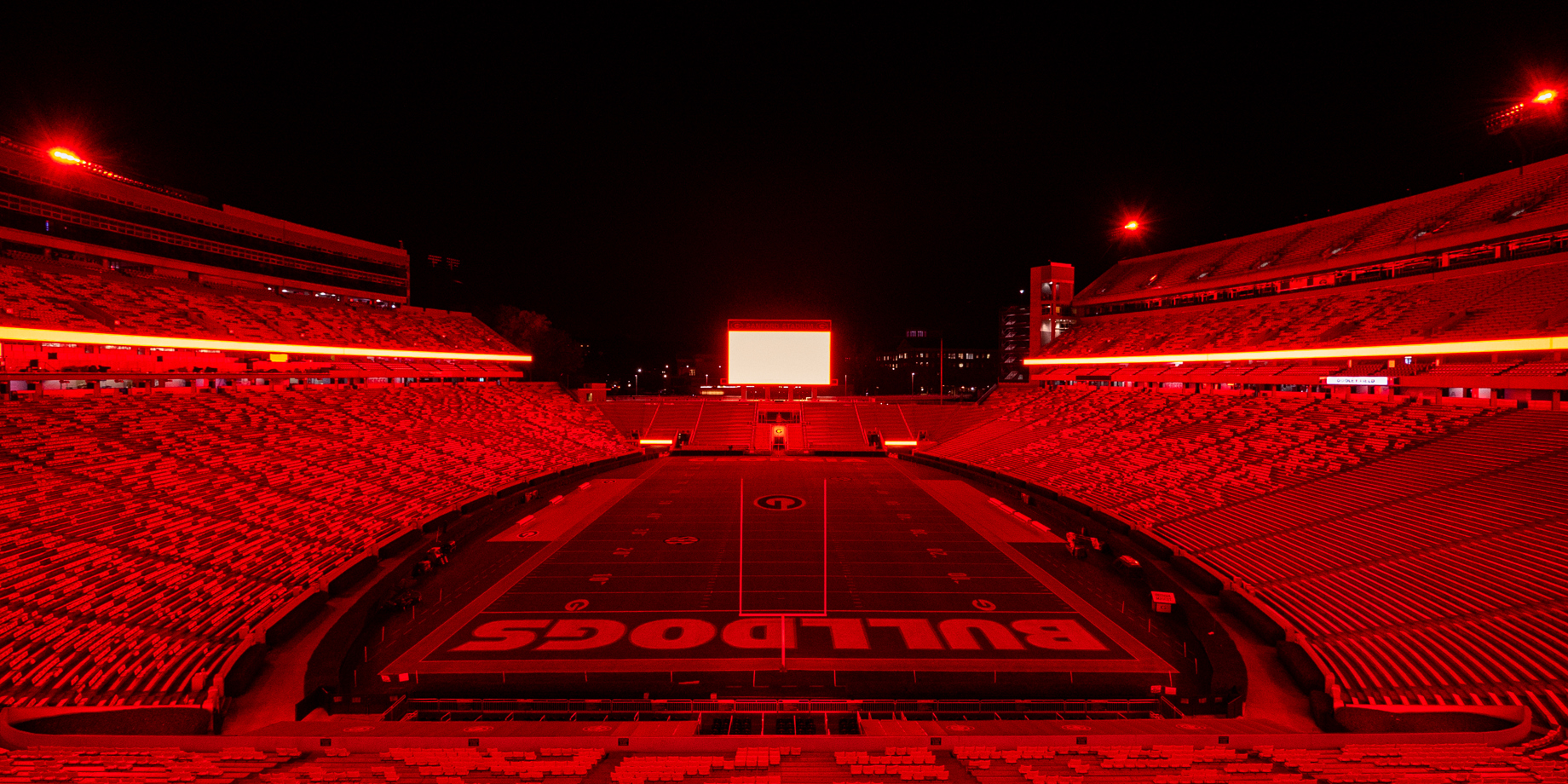 Our team recently took a trip to the University of Georgia to get a behind-the-scenes look at their game-day productions. While there were plenty of pictures and videos taken, we also sat down with Daktronics Event Producer Anna Pence to hear what she does on campus. One of the main features she pointed out was the light show after installing new LED stadium lighting in 2019, but we’ll let her tell you about what they are doing at UGA’s Sanford Stadium. 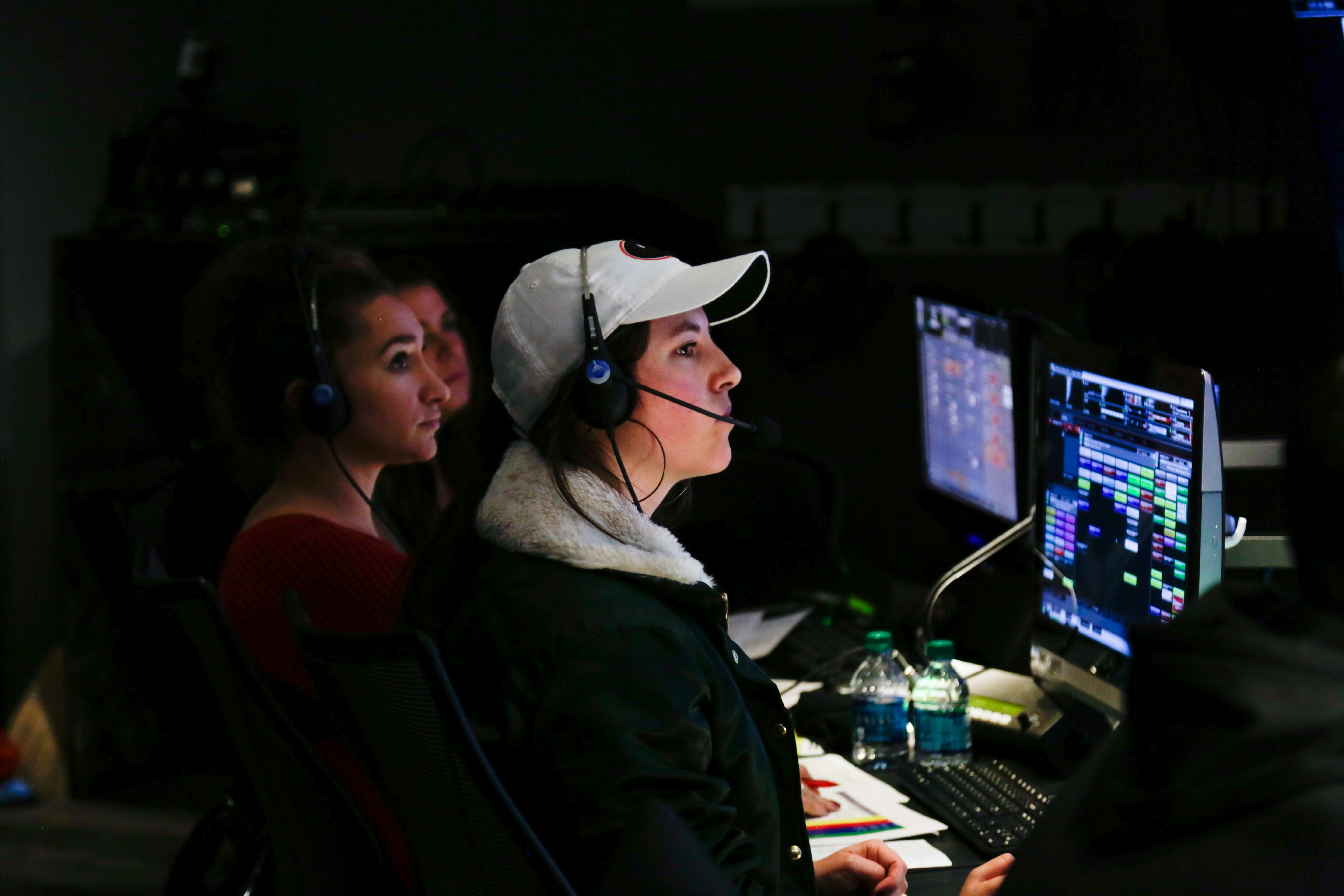 Q: How long have you been in your position at Georgia?
A: I have been at UGA full time since the fall of 2016, but I was a freelance independent contractor student since early 2014.

Q: What do you like best about it?
A: Athletics is the town. I mean, Georgia football kind of reigns supreme here; it’s so deeply rooted in this town. Obviously, we have all the other sports, too, and we love them as well. But it’s kind of hard to trump 93,000 people, you know? But I am really close with the actual department of athletics and they’re really, really wonderful to work with and they’ve been doing it well. 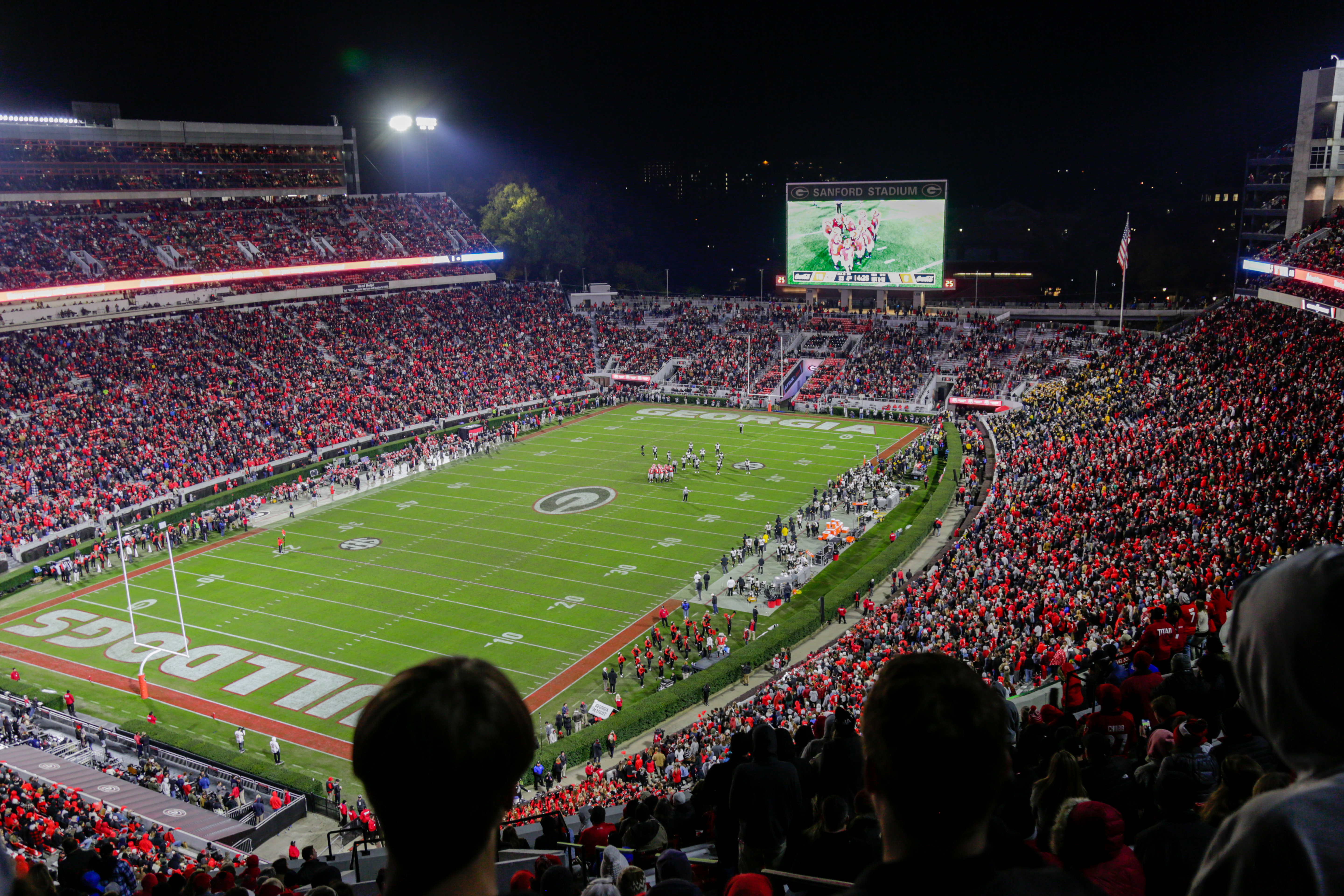 Q: What’s the feel of the stadium during football games?
A: It’s electric! It really is. People come in from all over the place and it’s always fun knowing that there are going to be people that have never seen a Georgia football game in their entire life in the stands as well. But when you have that kind of energy, it just feeds into the town’s energy even more and it’s exciting.

Q: Can you tell us about the lighting feature you put on during games?
A: Yeah, it’s really cool. We time the stadium lighting with the music and the content we play on the video board for a larger in-game effect, and we trigger it all from our Show Control system. 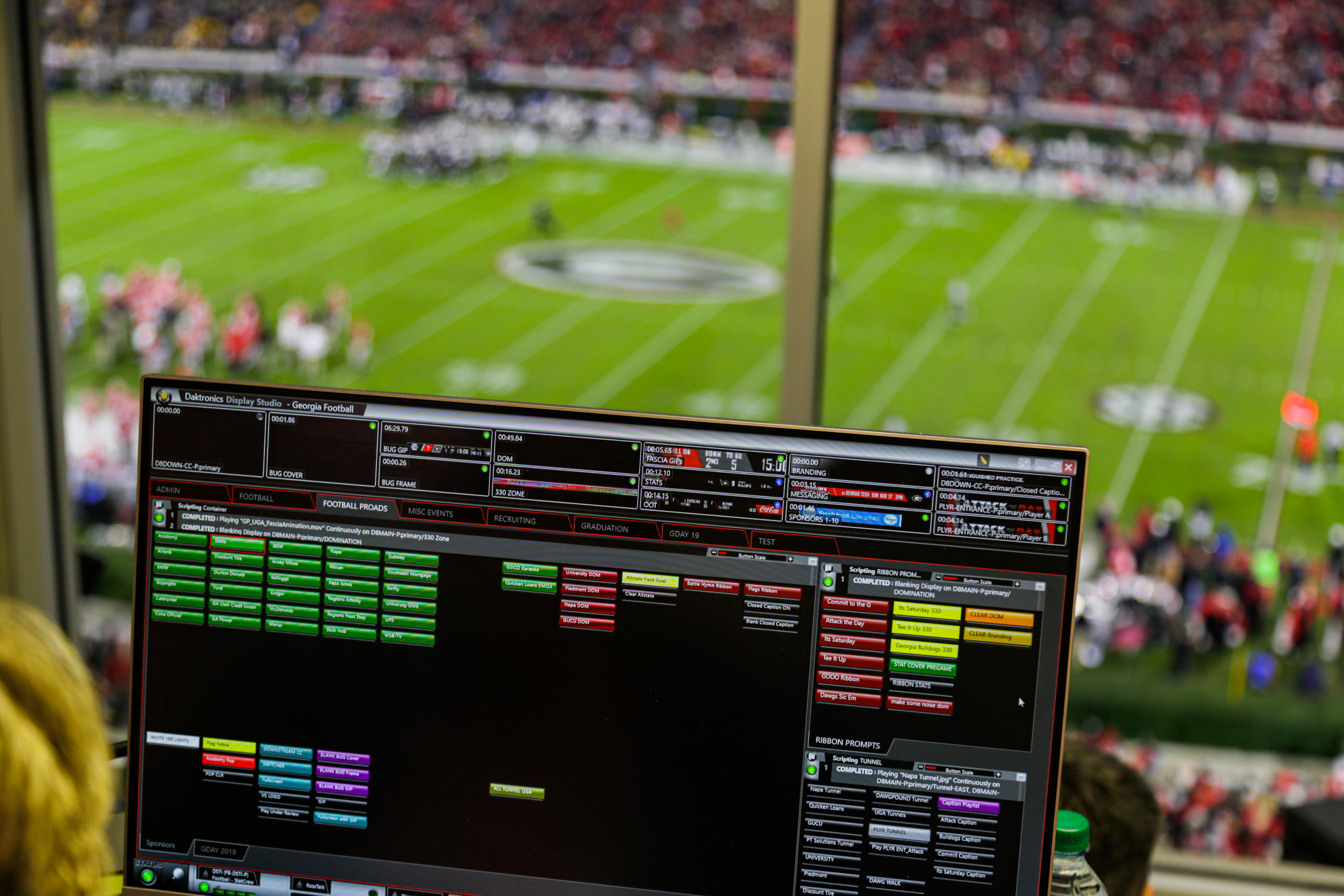 To make it happen, we sit down with the lighting guys during the preseason and tell them the types of effects we want, and they build those spirals and waves and everything like that. Then I’ll use them basically timed to what I feel sounds right with the video or what looks right. Next, they make those all permanent lighting effects that I can use now like different strobe levels.

It’s built like a macro script. Basically, the lighting guys just say, “Go find this in your system.” It’s labeled like some effect “005” or something like that, and then I’ll either do an include script on the show control – which is a cool thing that Show Control can do – or I’ll just copy and paste the line of script into a button. By using “wait scripts,” you time it out so when I play this video, it waits a certain amount of time before activating the effect. I watch it beforehand and I’ll say, “Okay, at ten seconds in I want this effect to happen.” So, I’ll tell the script to wait 10,000 milliseconds and then trigger the sliding element so it’s timed to the music. It’s harder at football because it’s such a big bowl that it sounds different from everywhere you sit. So, I try to sit down at one end, farthest in from the video board, to test it so should have the same impact pretty much everywhere else. 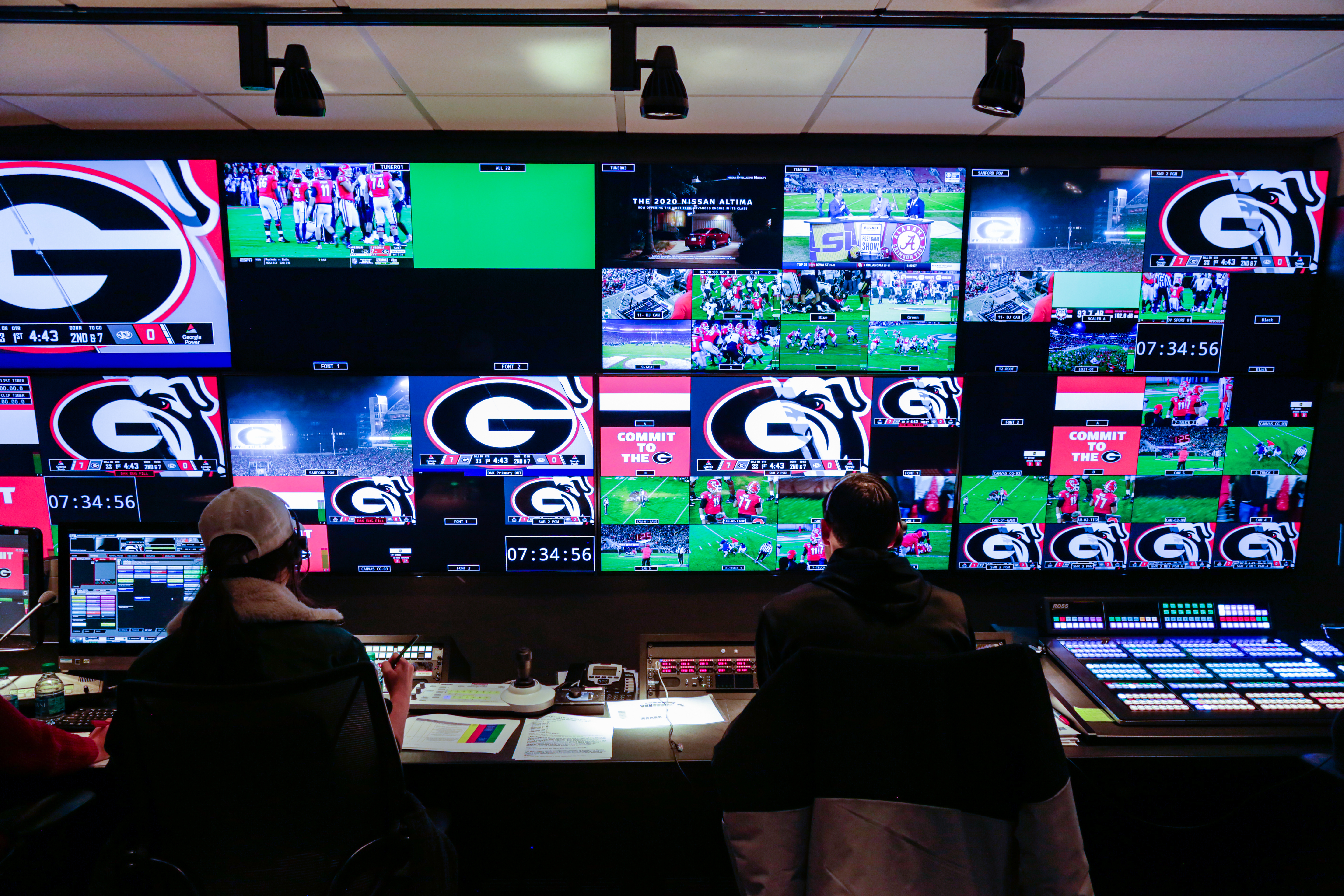 Q: So, you set it up to trigger the full lighting effect in time with the video board from a single button in Show Control?
A: Yeah, it’s all within a Show Control button. The “include script” feature is really cool. Say something happens at the end of our video. I can build a button with a specific beat that tells the lights to come up and come down and then come up and come down and then come up to full brightness. I build that in a show control button and then I set my button with the video so at however many milliseconds down it finds that button and says, “Okay, this is the exact beat of the lights that it needs to play at this time.” It’s really cool.

Q: Are there any other cool things you’re doing with lighting at the stadium?
A: We talked about a new idea over the summer after we saw some other schools turning on their stadium lights in a certain color. We thought we could put a UGA spin on it and use all of our video boards and red lights. Now, every Friday night before a home game we turn on all the red lights in the stadium. People walk on the bridge, students will stop by and cars will stop just to take their photo with the lights. It gets them more amped up for game day, and now it’s just our little tradition that we do.

If you’d like more information on how to pull off a light show like this, please reach out to our Professional Services team at professionalservices@daktronics.com.